Let me say at the outset that I am very new to Dynamics AX role centers and analysis services and really have a lot to learn. However I thought I would share the following problem with setting up role centers and the associated solution that I found.

Problem description: After installing role centers on AX2012 RTM CU 3 with SQL Server 2012 the following error is displayed “An attempt has been made to use a data extension ‘AXADOMD’ that is either not registered for this report server or is not supported in this edition of Reporting Services. (rsDataExtensionNotFound)”

Problem resolution / investigation: After chasing my tail on this one for quite a while (including multiple re-installation etc) trying to figure out why the “AXADOMD” SSRS datasource extension was not installed I discovered that the problem did not lie with “AXADOMD” being missing but rather it might be having issues when it was loading.

ERROR: Exception caught instantiating AXADOMD report server extension: System.Reflection.TargetInvocationException: Exception has been thrown by the target of an invocation. —> System.IO.FileNotFoundException: Could not load file or assembly ‘Microsoft.AnalysisServices.AdomdClient, Version=10.0.0.0, Culture=neutral, PublicKeyToken=89845dcd8080cc91’ or one of its dependencies. The system cannot find the file specified.
File name: ‘Microsoft.AnalysisServices.AdomdClient, Version=10.0.0.0, Culture=neutral, PublicKeyToken=89845dcd8080cc91’
at Microsoft.Dynamics.Framework.Reports.AxAdomdConnection..ctor()

This lead me to think something might be wrong with the Microsoft.AnalysisServices.AdomdClient itself despite the AX installation validation showing up that it was installed already.

Paying a quick visit to C:\Windows\Assembly revealed that only AdomdClient version 11.0.0.0 was installed 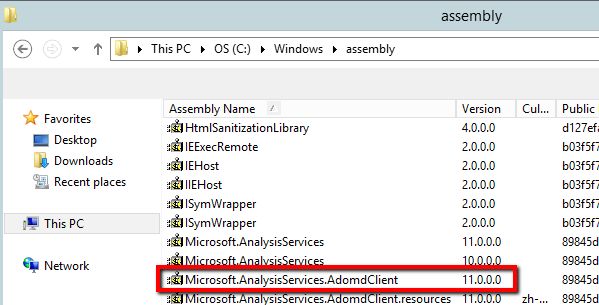 The simple solution to this issue was to install the 10.0.0.0 client from http://www.microsoft.com/en-za/download/details.aspx?id=23089 after which SSRS no longer complained.

I hope this saves somebody some of the hassle and time that I have spent on figuring this one out.